It’s not easy being optimistic in London but on the day after winning the bid for the Olympics, the world suddenly felt a lot brighter… And then a bomb went off.

In My Name is a bold, dark and funny insight into the consequences of allowing life to pass you by. No matter how much you bury your head in the sand the world has a way of forcing itself right through your front door. 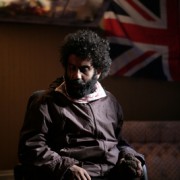 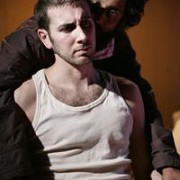 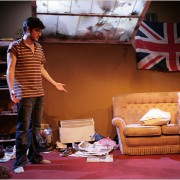 Reviews for In My Name

“Directed by Julia Stubbs and acted with a bruising physicality rarely seen this side of an old Sam Shepard play… In My Name is a thorough piece of present-tense naturalism.” Ben Brantley – The New York Times

“The comedy is nervy, nasty and truthful… the performances are top-notch… What began as an unsettling underclass comedy develops into a brutal psychological thriller” The Spectator

“… aside from the obvious reaction to terrorism, Hevey’s play flirts with a host of other 21st century issues. His representation of struggling young working males and the different issues they face marks him as a writer with a keen observational eye for realism” Official London Theatre Review

“… revived with pace and efficiency by Julia Stubbs” ReviewsGate

No matter where you run, where you hide, I’ll be there, after you. Reminding you of what you did…

The story of In My Name

Following my debut production as a director and through meeting and working on Thin Toes with Georgia Lowe, a very talented emerging designer, she introduced me to an up-and-coming theatre company Yaller Skunk who had the opportunity to transfer a new play from the fringe to an Off-West End venue.

I was then asked to re-direct the production of Steven Hevey’s incredible first play, In My Name for its Off-West End transfer.

Featuring four exceptional young actors – James Alexandrou, Ray Panthaki, Kevin Watt and Adeel Akhtar – the play was a razor-sharp, black comedy that placed four disparate characters in a flat on the day of the London bombings in 2005.

Opening in July 2008 at the Trafalgar Studios, the production was awarded a host of brilliant reviews and also named by the Evening Standard as one of the ‘FIVE BEST PLAYS in London’ at the time.