Ray wants to enjoy a quiet drink with his wife Doreen at their local pub, just as they have done for years.

But a moment from their past that has never been spoken of will change this particular quiet drink and their lives forever.

Produced by Kate Bannister and Karl Swinyard of The Jack Studio Theatre as part of the CONNECT 2020 project.

Mel Pennant is a playwright, screenwriter and novelist. She graduated in 2014 with an MA in Screenwriting at the London College of Communication. In 2013, she won the Jack Studio Write Now 4 award where her play, No Rhyme, had a two-week run. Mel has been involved with the Tamasha Theatre Company writing for the Barbican Box. She’s been in a week’s development programme at the Barbican with six young actors and written a short play called Smile in collaboration with the National Archives. Smile was shown at Rich Mix and was turned into a radio play. In 2017, Mel was also shortlisted for the Alfred Fagon Award for her play A Black Fella Walks into a Bar.

In 2018/2019, Mel was awarded a place on the Hachette/Tamasha pilot scheme for aspiring playwright/novelists and is currently developing her first novel, The Corpse on Bute Street.  Mel was commissioned by the Belgrade Coventry Theatre and Tamasha to collaborate on a project which would have been available for Coventry’s City of Culture in 2021. Mel’s play, SEEDS, directed by Anastasia Osei-Kuffour and produced by Tiata Fahodzi, Leeds Playhouse, Wrested Veil, Tara Finney Productions and Soho Theatre had just commenced a national tour when lockdown halted production. 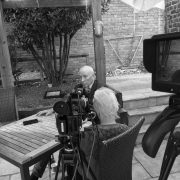 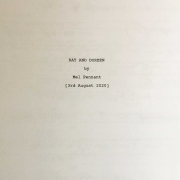 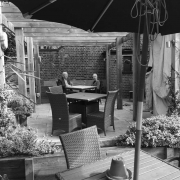 I don‘t forget… I just let you think I do. It’s easier.

The story behind Ray and Doreen

The Jack Studio Theatre in Brockley, south-east London is an award-winning pub theatre where I’m Literary Associate. Like so many venues, lockdown hit hard but a lifeline for the theatre to continue came in the form of funding from Arts Council England. As part of the funding package received, the Jack Studio had proposed a project called CONNECT in which four writers who’ve previously had plays produced there, would each write a 10-minute short film script. These scripts would then be filmed and put out online in autumn 2020 on the Jack Studio’s website.

Kate Bannister, the Jack Studio’s Artistic Director, contacted me and asked if I would be interested in directing one of the short films, Ray and Doreen by Mel Pennant? I knew that the script would be brilliantly written as I’d admired Mel’s play No Rhyme at The Jack Studio some years before. But reading this beautifully touching two-character piece made me so excited at the prospect of directing this film and working with a pair of talented actors and an equally talented cinematographer so I eagerly accepted.

I was hugely fortunate on both counts being recommended Dan and Pauline Armour, an acting couple who also run The Bromley Little Theatre, for the roles of Ray and Doreen and then being recommended NFTS trained cinematographer Alfred Thirolle to come on board as director of photography. Shooting the piece over two days in September 2020 was an amazing experience and I’m keen to share the finished film online on the Jack Studio’s website very soon.